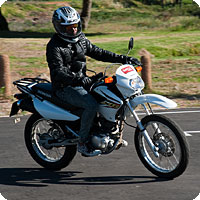 h Steven Hofmann. Covered in dust and armed with a smile, the modest 25 year old German was on his way to South Africa’s mother city, Cape Town. 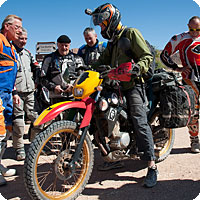 Although this is not remarkable news in itself, biker camaraderie prevailed and the group soon learnt that he had started his journey in Franconia, Germany. And, because Steve had wound his way over the Alps and down the West Coast of Africa on a hardy Yamaha 125cc, Karoo Biking forgave him for not choosing BMW.

Surviving on a budget of ten US Dollars a day, the intrepid traveller planned to enjoy the luxury of Africa’s southernmost tip before making a U-turn and heading back, this time via the East Coast. Karoo Biking is particularly grateful to Steve for taking time out while in Cape Town to teach our newest recruit, Menzi Cele how to properly handle a machine and imparted a few tips on enduro-riding to the passionate novice. 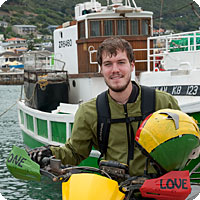 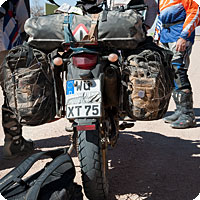 No stranger to extended bike travels, Steve earned his stripes and wracked-up some experience some two years ago, when he did something similar, travelling 35,000 km from Malaysia through India, Pakistan and numerous other counties albeit on a Suzuki V-Strom 650 ABS to get home.

Karoo Biking salutes this intrepid traveller, raises a glass to his fearlessness and wishes him well on travels back home.